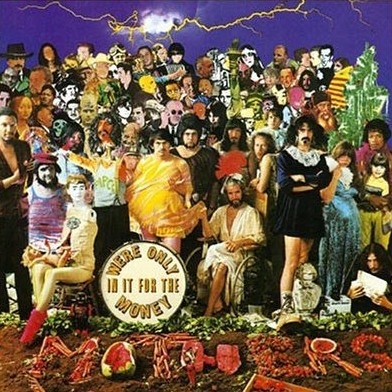 VF Daily: How would you explain these two albums to somebody who isn’t all that familiar with Frank Zappa?

Gail Zappa: Lumpy Gravy and We’re Only in it for the Money are part of what Frank called his master work. For him, every album was just part of the same composition and everything was all one big piece of music. But the three particular pieces that he considered his absolute masterwork were Lumpy Gravy, We’re Only in it for the Money, and Civilization Phase 3, the last album that he actually finished. They’re constructed in a similar way.

How does this fit in with the rest of the re-release series you’re working on?

We want to honor all the re-releases in the 40th anniversary. But the exception is these two, because they are also part of the masterwork. Because they belong withCivilization to be seen properly. So in this particular case what we’re going to try to do is to be more focused on the process on Frank’s work, as opposed to [including alternate] versions [of individual songs]. If you look at a score, sometimes you’ll see sketches of what’s going to be in the score before the score is written. That’s kind of what we’re going for with this record. Little sketches of it, as opposed to completely other versions that didn’t “make it to the record.”

Will Civilization be sold separately?

Yeah. Although we are going to do a special edition of these three records, shortly. We didn’t announce that because we thought it would be too confusing. And it already is confusing. I’m going to be really surprised if I manage to get through this alive.

If you don’t like confusion you should probably step away from the Frank Zappa discography. That’s part of the fun of it, don’t you think?

Confusion I’m not fond of. But chaos I thrive on.

You’re very conscientious about protecting Frank Zappa’s legacy. What’s the thing that worries you the most about that legacy and how it’s being treated?

Identity theft. I’m glad you asked me. No one has asked that before. And that’s what it is: Identity theft. Because everybody imagines who Frank Zappa is. And then they go on, some of them, to imagine, I could make some money if I reinvent Frank Zappa in my own image. Which may suck, by the way. So people write books and they make records and they do this stuff. So every day my job is to protect and serve, like the L.A.P.D. Protect the integrity of the work itself. And serve the intent of the composer.

How does that work out, pragmatically speaking?

It’s a lot of squabbling over copyright issues. The real reason why I do this is because it’s just my obligation to Frank Zappa, who really believed in the Constitution of the United States of America, and one of its provisions covers copyright. And I don’t like people fucking with Frank’s last word, and his last word is his music.

I know that you’ve had some issues with iTunes, and that you object to the MP3 format because it requires music files to be so compressed. Do you ever worry that if people can’t get MP3 downloads, you’re going to miss a chance to reach new fans?

Well, you know, I’m of two minds there. First of all, this is a concept that Frank thought up in 1983 and published a copyrighted document on, that was filed with the copyright office. The idea was to deliver music over phone lines. As usual, he’s prescient. I don’t know how it would be different had Frank lived. Or how he would necessarily feel about it. But I do know his intention was that his music should not be massively compressed. And for that reason he insisted that his masters be sold in a specific format; anything less than that format was not permitted under the agreement. And iTunes was way below 16-bit technology [when Rykodisc, which had the rights to the Zappa catalogue, made it available there]. So I’m not having an argument with iTunes. I was always having the argument with the delivery by Ryko of something that they weren’t entitled to do, which is the digital download of less than 16-bit technology.

Frank makes fun of hippie culture a lot in We’re Only in it for the Money.What do you think he’d be making fun of today?

Well, anybody who takes themselves seriously. Nobody was spared, including himself. He was certainly relegated to that sort of—it’s hard for you to imagine, because you sound like you’re about 12.

Very close, from my perspective. I have a son your age. When these records were made, everything in the media was about them and not us. We were excluded. And if we were talked about at all, they pointed the finger: those are them and they’re dangerous. So we were a little separate community, everybody under the age of 25 in 1965. It’s hard to imagine for people now, especially your age, that your whole country, your parents and everybody, would be against you if you behaved or looked a certain way. It’s so pervasive now that no one cares anymore.

The mainstream culture has also become very adept at co-opting anything that’s at all creative or “edgy.”

Absolutely. That’s absolutely true. Frank never intended to be psychedelic or avant-garde or any of those titles that have been visited upon him by everybody else in retrospect. That wasn’t what he was trying to do at all. He was just saying, This is what I think about that, and this is how I’m going to show you what I think.

Speaking of your children, I caught one of Dweezil’s performances of the Frank Zappa catalogue a year or two ago at the Jammies.

You have to see it now! It’s nothing like that now. That was when they first started out. And there was so much pressure for them to have original members that played in Frank’s band. And it was just so heartbreaking for all of us—especially the family—that we had to do that. Because we just believe in the music and that it’s alive and well, and that it doesn’t need those guys to hold it up anymore. Or to participate in any way. If it can’t be played by people of your generation, then what’s the point?